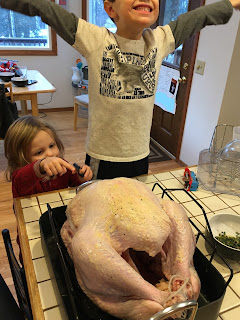 (After reading the story of the Battle of Jericho)

9 yo: So did people already live in the land that God was giving the Israelites?

Me: Yeah, there were people living there.

9 yo: But that’s not nice. If there were already people living there, the Israelites were invaders.

Me: Well that is a good point. God promised the people a land, but yes, there were already people there.

Me: Some of these old stories in the Bible are hard to hear.

Me: Maybe God did. You know, I think these stories were written by the Israelites to show God’s power and how God saved them and helped them. But yeah, it isn't fair to the people already living there.

9 yo: They could have just shared the land, you know.

It's Thanksgiving Eve, in a place nothing like Jericho, except for one thing: someone else was living on this land first. We could have just shared it, but we did not.

I had the above conversation with my children a few weeks ago; none of us were thinking about Thanksgiving then. But as I sit down to write this blog post with a 15-pound turkey defrosting in the fridge and a countertop of ingredients for tomorrow's meal, the similarities are not lost on me. Thanksgiving is special time to focus on gratitude with family and friends. And/but, it's origins came from settlers of this nation, who determined that God wanted them to take land from the original inhabitants. Just like Jericho.

Like many non-Native children, I grew up with zero concerns about Thanksgiving. I colored pictures of cornucopias, wore a paper Pilgrim hat in school, and helped my mom make turkeys out of pinecones and construction paper feathers (they were really cute). If I had any thoughts at all about the original Thanksgiving, it was how great it was that everyone could come together and share a meal. The surrounding and subsequent loss of Indigenous lives, culture, traditions and even entire tribes was unknown to me. I had never met a Native person. I didn't know the name of the tribe who met the settlers near Plymouth (Wampanoag). I wasn't aware that there were any Wampanoag people still around. I was still perplexed during my first year of seminary when I used the phrase "Columbus Day" and someone asked me to consider saying "Indigenous Peoples Day" instead. I couldn't see why that was necessary.  I've learned a few things since then. And as my bishop says, when you know better, you do better.

My children are growing up in a much more diverse community than I did and they are fortunate to know people of many colors, including Indigenous friends. We've discussed race and racism, as it appears in real life or literature and I try to connect the conversations to our faith. It's not always easy and I probably mess it up sometimes.

One of my favorite book series as a child was the Little House books, by Laura Ingalls Wilder. These were particularly beloved in my family; a favorite aunt, who was also my godmother, was an original founder of a Laura museum in Burr Oak, Iowa, where Laura lived between On the Banks of Plum Creek and By the Shores of Silver Lake, but did not write about, as it was a time of loss for the family.

I've thrilled to see how my boys love Laura's tales from the woods and prairie, and beg for another book as soon as we finish our current one. They laughed at how Ma churned butter by hanging a pail of milk from covered wagon and how Laura rejoiced at a Christmas when she received mittens, a stick of candy and one penny. But Ingalls' are settlers on Osage lands in Little House on the Prairie. Ma Ingalls says wildly inappropriate things about the Osage (in part from fear of what she doesn't know) but Pa often takes a different tack and explains things from the Osage perspective. In the end, Pa expresses gratitude for an Osage leader who advocates for the Ingalls' family's safety among his tribe.

This is an oversimplification of the story and the complexity  -- and complicity -- of settlers like the Ingalls, but while the book created some discomfort for me this time around, it also became space for conversation with my children. We paused as I read, pointing out perspectives on Native peoples and discussing it together.

It's one thing to critique a piece of literature, and quite another to critique Scripture. Or is it? My children seem to feel free to express their disagreement with the Old Testament stories of invasion and conquest. As a child I felt too nervous to disagree with anything between Genesis and Revelation. The Bible was to be obeyed. As an adult, I think more about the Bible as relationship, a place to dwell, to wrestle, to wonder, to doubt, even as I stand in awe of the love of the One the book reveals.

My children asked if we couldn't just share this land. It's far too late for Jericho. If you haven't read the full chapter of Joshua 6, I can't really recommend it. Spoiler alert: after the walls fall down, the Israelite army dedicates the city to the Lord, and then, with swords, massacres every single man, woman, child, donkey, sheep and cow. Then they burned the entire city and everything in it. You'd think they could've at least saved the livestock for pragmatic reasons.

It's hard to know how many Indigenous people were killed in the "Jericho situation" in what we call the United States. Read up if you dare, the statistics are sobering. Some estimate that 90-95% of the Indigenous population died or was killed after Columbus arrived in what was called the new world. Sometimes they died of disease. Sometimes it was outright massacre of men, women and children. It was done in the name of the Lord.

It's too late for those who have died and the traditions, languages and cultures that were annihilated. But I wonder if it isn't too late for some kind of sharing of the land. Many US denominations have formally apologized to Native peoples and some have made reparations. The Evangelical Lutheran Church in America, of which I am a part, formally repudiated the Doctrine of Discovery -- an old document that says whatever white people "discover," they can have, because Jesus. What does it mean to share the land? Is it too late? Reparations and land back movements have gained steam in some places in the US and Canada. The idea of giving land back makes many White people nervous  -- why should we give away something that's been ours for so long? Yet when you're accustomed to privilege, equality feels like oppression, and maybe discomfort is not the very worst thing in the world. There are birth pangs when something is being born.