Build your own boat 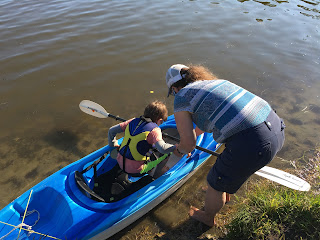 (Rather, in the car on the way to school)

Me: You can try to swat it. That reminds of the funny saying: Why didn't Noah swat those two mosquitos when he had the chance?

Me: You know, how Noah had two of every kind of animal on the ark with him? He could have killed those mosquitos.

6 yo: How did he get all those animals on the ark?

Me: I don't know, good question. I've seen some paintings of him dragging or pushing them.

6 yo: It would be stinky on there.

Me: Yeah, I bet it would. But anyway, it's kind of a sad story because so many people die.

Me: Well, they didn't get on the ark and so they all drowned.

(Silence while everyone ponders this.)

8 yo: (I did not realize he was paying attention.) You know, now that I think of it, I don't know why those punks didn't just build their own boats.

My son, the Horatio Alger-style capitalist. Also, where did he learn to call people "punks"?!

The myth of the self-made man/woman/person is pervasive. And it's a good question to puzzle out with kids. Why didn't Noah's neighbors just build their own boat? Why didn't they take care of themselves? Why didn't they just pull themselves up by their own boot -- er, sandal -- straps? Of course in the Biblical story of Noah in Genesis, no one else believes a flood was coming. But can you imagine if everyone did? Would they have built their own boats? Asked to get on Noah's boat? Would he have charged them for it, an ancient Near East cruise ship?

Childhood is an interesting mix of messages and internalized beliefs about doing things for yourself versus asking for help and helping others. "Do it self!" -- my middle son as a toddler, about everything. "I'm too tired to walk up the stairs, can you carry me?" Also my middle son. Last week. At age 6.

I tend to be a "helper" personality (job hazard for preacher types) and I've erred on the side of doing things for my children that they could do for themselves. Sometimes it's out of habit, sometimes it's out of impatience. Ask anyone who has ever watched a toddler try to put on a coat -- especially if you're already late for school and work. I know I'm not alone: one of the most comforting conversations I ever had with one of my kids' teachers was when she confessed she struggled with this and realized she was still serving breakfast each day to a 12-year-old who could clearly pour his own cereal.

Too much help isn't great, but too little help hurts, too. No one builds their own boat all the time. I saw a Facebook meme recently about "imposing" on others (by asking friends for a favor, grocery run or help around the house, whatever) and the point was that we all might do better with a little more "imposing" in our lives. But let's not call it that. Let's call it genuine community.

A couple weeks ago I went on a purge and sold a bunch of stuff on Facebook marketplace. It felt good, but the thing that really made my day that week was when I loaned two children's rain suits to a total stranger in a "Buy Nothing" Facebook group so that she could take her kids canoeing in wet conditions. She posted a picture of her kids in the suits with the canoe, and tagged me, and I felt so good all day. (I got the rain suits back safe and sound, too).

Driving around town today, my children and I passed a young man holding a sign at a stop light that asked for spare change. Mom, said my 6-year-old, I wonder if he could go to the homeless shelter? Maybe he has, I said, or doesn't want to, or has another housing plan. Our local shelter has a 30 day in, 30 day out policy, so it's not a permanent solution. But, I added, there are places in town where people who have big challenges, maybe in their bodies or brains, can live full time, instead of on the streets. They seemed surprised that a grown up would need that much help. There are some people who can't, for any number of reasons, ever build their own boats.

The truth is, those people are us. We all need other people -- families, friends, institutions like schools, hospitals, first responders and governments. We've all needed help to build our boats, to get to where we are, although as has been said, some of us were born on first, second or third base.

Jesus' seems to have poor boundaries from a modern view, about how much we should help others. He heals nearly everyone who comes to him; there's not much "bootstrap" theology. But even the Lord of Heaven and Earth does take some breaks to rest and pray. Help, pray, help, pray, help, pray. We could do worse.

So, you could build your own boat, if you wanted, but maybe ask your neighbor to help. You're not imposing. I promise.