Even mountains move: arguments with God 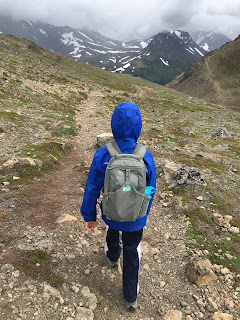 (After reading about the 10 plagues in the Exodus story)

8 yo: I don't like that story. God was being mean. He was killing people.

Me: Yeah, it's a hard story. I don't really like it that well either. I wonder if there was another way God and Moses could have gotten the Pharaoh to let the people go.

6 yo: He could have said if you don't let my people go, I will kill every one of you!

Me: Hmmm, I don't think that's much nicer. Do you have any other ideas?

8 yo: That story just makes me sad.

It would never have occurred to me as a child to admit I didn't like a Bible story, or that I thought God made the wrong decision in one of them. It would have felt disrespectful. Who was I to question God? The scriptures seemed immovable, impenetrable, infallible -- the Bible was a giant mountain, mysterious and old as time.

Many things felt immovable and non-negotiable as a child: for whom I should vote, what political party was "right," where I should live, what kind of people I should associate with. There were plenty of mountains.

But that was before I learned that even mountains move, quake, erupt and erode. They are alive.

I'm not sure I can take all the credit for my children's questions, disagreements and even arguments with the Bible. My older son, especially, has his father's engineer's eye for details, discrepancies and parts that don't quite fit. Our family is part of a congregation and denomination that encourages us to wrestle with the scriptures, welcoming our questions and doubts. And we're certainly not the first ones.

Biblical characters themselves wrestled with God, sometimes even literally -- see: Jacob. Abraham negotiated with God, so did Moses. Jonah and Job argued with God, too. Jewish tradition builds on these stories with a hearty appreciation for and even an encouragement to argue with the Bible stories. The Talmud itself, the foundation of Jewish law, is a collection of debates, opinions, ideas and wrestling by many rabbis. Yet somehow, Christians often shy away from arguing with the scriptures to tease out deeper meaning, or even multiple meanings, preferring to wield Scripture as an authoritative sword. There's an old joke that says some folks use the Bible the way an intoxicated person uses a lamppost: for support, rather than illumination.

My 8 and 6 year-olds argue with the Scriptures in a playful way, at times, but at times they are dead serious. My 8 year-old runs sensitive; his face showed how crushed he was to think that a God of love would kill Egyptian children for the mistakes of their leader. My later attempts to soothe him by saying, "well, that was a long time ago," did not dissuade him. Children are not easily fooled.

I think I was in college before I realized that I could question Scripture, dislike parts of it, and even -- gasp -- question its scientific and historical accuracy, all while remaining a follower of Jesus. (Fun fact: the authors of Scripture thought the world was flat). Sometimes it felt like an earthquake shaking those mountains of certainty, but you know what? They were just shaken, they weren't gone. And the rebar of a faith that has wrestled and questioned made for stronger reinforcements for the next shake up.

I think about the other mountains of belief that I carried over from my childhood -- some of these have not survived the earthquakes of questioning, lived experience and meeting folks of other races, cultures and identities. Some of those mountains turned out to be houses of cards. Others evolved over the years. I have either changed or tweaked my convictions about abortion and women's health care, for example, about three times (but that's a topic for another essay). I try not to feel threatened with the thought of changing my mind about something (some days this is very hard). There's so much to learn in life. Another person's argument, if I can listen, might be the glimpse of reason, or even the divine, that will help me to grow.

Child behavioral psychologists talk about a "growth" mindset as more beneficial for children than a "fixed" mindset. If someone tells you that you're "good at math," you might not try new problems for fear of failing and proving them wrong. But if you're told you can get better at math when you try harder problems, you'll likely do just that. You realize you can grow.

We're going to keep wrestling with Scripture in our house, and probably everything else. Scripture is a living word, speaking fresh to us each day, even though it is so very old. It feels a bit counterintuitive to me still to question God (childhood programming is hard to debug) but it feels like holy work. I know that in stressful times, it's easier to cling to what is known and hard to entertain new ideas. I know the questions and arguments will get harder and there may be long valleys ahead. We'll pace ourselves. The mountain of God's love isn't going anywhere, even if it shifts, moves, and grows.