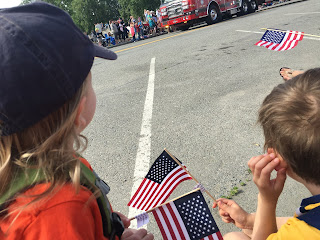 Me: (After saying our rote prayer together) Okay so now what do you want to thank God for? Or ask God to help you or someone else?

5 yo: (Places hand on heart) I pledge allegiance to the flag of the United States of America....

Me: Yes but prayer is talking to God and the pledge of allegiance is about the United States. It's like saying you love the US and support it and that's great but it's not a prayer.

5 yo: But this my my prayer! I am thanking God!

5 yo: (With great solemnity) I pledge allegiance to the flag, of the United States of America. And to the republic, of which it stands, under God, liberty and justice for all.

8 yo: You missed some parts.

Kindergarten has been amazing for my 5-year-old. A natural extrovert who stayed home for nearly 18 months of the pandemic, he's been thrilled to be in an environment where he can make friends, learn new ideas, sing songs and play tag to exhaustion at recess.

Most days, he comes home with some new idea or highlight from school, which he shares with exuberance. I learned the 5 little pumpkins song! I know how to spell dog --D-O-G! We collected leaves today! There's a sledding hill on the playground! Everything is new and exciting.

I didn't realize he had the pledge of allegiance (mostly) memorized until the night last week when this conversation occurred. It makes sense; they say it at school every day. But now he does an nightly recitation of the pledge during prayer time. He is very serious. He enunciates the words. He gets mad if he's interrupted. He usually does it 2-3 times through. He is reverent.

Reverence can be defined as deep respect, tinged with awe. It's often associated with religious practices, a label for the posture we take toward God or whatever higher power you like. But reverence isn't limited to that. You can revere lots of things -- nature, truth, wisdom, countries, and yes, the flag. The ability to deeply respect, or revere, something beyond ourselves is, I'd say, an essential part of being human, an experience I think most parents want for their children.

I want my child to respect both his God and his country, but look how quick I am to correct his prayer life! I admit, some of this is my deep theological discomfort -- no, protest -- against any attempt to meld a worship of God and country. It is idolatry. You can love Jesus and love the flag but as for me and my house we will only worship the former. It's has been terrifying (that is the word I mean) to see more recent attempts to marry God and country. To suggest that Jesus, a political dissident in the Roman Empire, is choosing US presidents to live out any party platform is a gross abuse of the Good News of Jesus Christ. No. I renounce this.

But in my rush to "explain" that the pledge isn't a prayer, I seem to have forgotten that, well, it could be. Why not? Why not say whatever is on our mind and heart when we come to God? In my haste, I ran a bit roughshod over my 5-year-old's reverence.

Paul Woodruff in his small book entitled Reverence: Renewing a Forgotten Virtue, says that reverence begins in a deep understanding of human limitations. He says that from this place, grows the capacity for awe. There are so many things beyond ourselves, that transcend us. Awe is an appropriate response to things we can't control. Woodruff adds that because of this, reverence is a virtue that keeps you from acting like a god. Well that sounds important!

Perhaps awareness of our limitations and the realization that we aren't always right, can't control everything and are not god, is an ideal posture toward both God and country. In fact, Woodruff in his book says reverence actually has more to do with politics than religion, adding that politics without reverence is "aflame with arrogance." (Reverence, p. 2). Perhaps reverence wherever we find it and however we practice it will help us live out deep respect and awe for all peoples and creation.

As my 5-year-old would say: Well, that is my prayer.