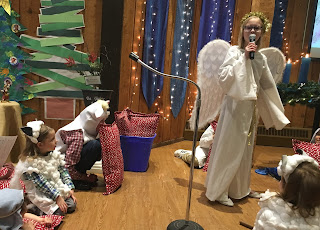 Me: So what did you think about the baptism today? (Our newest child was baptized!)

5 yo: I thought the pastor was going to pour water on the baby.

Me: She did put water on the baby's head, but it was more like a small splash, three times, when she said she baptized him in the name of the Father, the Son and the Holy Spirit.

Me: Yup, you got it. There's God, Jesus and the Holy Spirit.

5 yo: But what about the angels?

Me: Well, yeah, there are angels too, but they are not God.

Me: Angels hang out with God.

Me: Hmmm, well, maybe. What do you think?

8 yo: I think they're dead people.

5 yo: Like when that lion heard his dad talking to him from the stars! (We had watched Lion King recently)

Me: Well some cultures believe that when their ancestors die, they become stars.

8 yo: But stars are giant balls of helium and other gases.

Me: That is also true.

How have I had a blog about religious conversations for more than a year and never discussed angels? Everyone loves angels, even folks who aren't religious. Winged cherubs are practically American civil religion -- you can find them as figurines, starring in movies or during awkward conversations where people try comfort the bereaved (she's got her angel wings now).

I don't recall specific prior conversations with my children about angels, so I don't know why my child thinks they are dead people. Maybe he's heard passing comments, too, about how someone who has died is now singing in the heavenly choir or asking God whatever burning questions were unknowable on earth.

Are there angels with God? The Scriptures indicate so. Are we all going to turn into them? No idea. Are they real today? Could be. I remain open to mystery. Who am I to limit God?

Angels have often been portrayed in pop culture as sweet, ethereal or protective, but in the Bible, they must have totally freaked people out, because in the New Testament, their first words usually are "Do not be afraid," which to me suggests a human audience scared witless. Angels in scripture aren't just for show, they have a purpose. The Greek word for angel means "messenger." They show up to proclaim something, to bring good news, to speak about what God has done. This is not your docile Precious Moments statue.

My children did not really know their great-grandparents  - their last one died when they were toddlers. All of their grandparents are still living. There's no ancestor they are remembering, or missing. There's no one they think of as an angel looking out for them. But I remember my ancestors, missing them all the more poignantly as I age and have children of my own.

I'm starting to tell my kids stories of their ancestors, my grandparents and great-grandparents. Whether they think of them as angels or stars or something entirely different, the messages still matter. My grandmother's faith was an anchor through unspeakable tragedy during World War 2. She always kept a rosary on her dresser. My other grandmother called around each Sunday to find a ride to church after my grandpa died, because she never learned to drive and would not miss worship. If she could not get a ride, she called the pastor up to explain her absence.

I didn't say this to my children in this conversation, but what I hope they know is that those who have gone before us are still with us. I don't know if my grandmothers are literally floating around somewhere like TV-version angels, but I trust my ancestors are with God. Their messages endure. They live in me. I hope those messages come alive inside my kids, too.