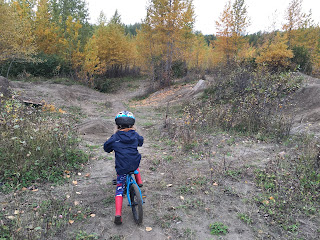 My son starts second grade tomorrow, but today we mountain biked trails that I'd gotten lost on while pregnant with him eight summers ago. This time, I knew the way. We rode a combination of single track, multi-use and paved trail, flying down the hills (okay I rode my brakes) and grinding gears on the up hills. As we rode, he realized he knew the way, too, having skied part of the trail last winter.

The first time I sought the trail that we so easily navigated today, I was seven months pregnant with this boy and new to the neighborhood. My husband and I had finally found a house in a tight housing market, and moved in just months before I gave birth. A neighbor mentioned a back way into the nearby municipal park – I had been running down the street to enter from the front – and I was determined to find it before I gave birth and had to take a break from running.

First I tried to find the way by starting in our neighborhood. I ran through an easement behind a neighbor's house and through unmarked but clearly defined trails. I dead-ended several times. Then I tried starting from the park and finding my way back home. I got lost on the same single track I was biking today. I was seven months pregnant, it was an unseasonably hot summer and I had forgotten a water bottle. I traced and re-traced my steps several times before finally popping out on a road and running home, all the while imaging the indignity of passing out a few hundred yards from a trail head.

After the baby was born and I recovered, I took up running again, but never again looked for the back way into the park. I had a baby now and no time to get lost. I crammed my runs into whatever time I could borrow, and then I had another baby and time became more scarce. There wasn't time to explore. There wasn't time for much of anything. Life moved at a speed beyond wander – maybe beyond wonder – but definitely beyond serendipitous discovery.

And then there was a global pandemic.

This child who will start second grade was last in a school building almost 18 months ago. He missed the last quarter of Kindergarten, then did first grade through Zoom. For most of that time, we were all at home together. My husband and I worked from home and our per-schooler ran laps around the house while his big brother wrote out spelling words, made maps and completed his daily “math minute.” It will surprise no teacher reading this, but I was shocked to discover that the required academic assignments did not nearly take the six hours that my child would have been at a school building. We did the Zoom and the worksheets, and then we had hours left. We had time to explore.

One sunny day early in the pandemic, I suggested we go on an expedition That is how I phrased it because my kids claim they don't like hiking and parenting is at least 90 percent marketing.

We hiked up that same easement behind the neighbor's house that I had run up years ago. We didn't know where we were going but we had so much time. On our own, we discovered a small loop, and even the kids delighted in calling ourselves explorers, pointing out interesting trees and rocks and collecting unusual sticks.

Over the next few weeks, we continued our expeditions behind the house. Soon, I found the trail that connected to the park that had evaded me before (it was annoyingly obvious). One day, we ran into another neighbor and her son, biking the trails. Where does this section of trail go? I asked her, and explained a bit about our explorations. We call this the luge section, she said, because of this big hill. But if you keep going up, it makes another loop and passes the most amazing view of the city and the mountains.

Of course, we headed up the luge.

From the top of the luge trail, we watched airplanes land and takeoff at the nearby airport. We saw the skyline of downtown. We named the mountain peaks we knew and made up names for the ones we didn't. I was stunned that this beautiful overlook was not even a 15-minute hike from my back door and it had taken me seven years to find it.

Over the course of that summer, we hiked the luge many times, and often I did it on my own. Our gym membership was long abandoned (thanks COVID) but I still had my running shoes and I still had the luge. And I had time.

It feels somehow wrong to be thankful for the gifts of the pandemic, when the virus has brought so much suffering and loss and despair. I know we're incredibly fortunate to have our work and our health and each other. And also I know this: it is okay, even in hard times, to be thankful for what is. And I am thankful for this time we have had together as a family. I'm thankful for the chance to be home with my kids so that we could explore new trails and paint canvas and bake bread and plant flowers. I'm thankful that my husband and I found more time to talk, to laugh, to dream about the future. Not that we didn't all get tired of each other during our time at home – we did – but the good has outweighed the bad, particularly because of what was new.

I continued to hike the luge trail regularly that first year of the pandemic and I still do. It's been fun to watch the seasons change on the trail. I know how it feels underfoot in mud, snow and tall grass. I've seen moose and heard bird song. I have watched myself change, too.

One morning late last summer I hiked up the luge trail full of wonder. The pregnancy test had shown two pink lines. A baby in a pandemic. What would this mean? I hiked the luge trail throughout the pregnancy, gradually slowing down. This spring I could barely do the entire loop (I think it's about a mile) for the pain in my lower back and hips. After the baby was born, I strapped him to my chest and as soon as I could, I hiked the luge trail once more, pausing at the overlook to catch my breath and stretch my aching back. The pandemic was starting to release its grip. I now had three children. Life was starting to move fast again. My husband was headed back to his office. My kids would soon be in school. Where was the space for exploration?

When we set out on our bike ride today, we didn't have an exact route in mind. There was one particular section we wanted to ride, and we did. We got there one way and took a different way home. There was one section where I had never been, but my son said he knew the way, from his ski coach. We popped out just where we wanted to be and rode home together.

I don't know what this school year will look like and I have realized these past few weeks that my body is holding on to stress and worry, particularly about the Delta variant and what it means to send children to school who are too young to vaccinate. Part of me is nostalgic for the long days of exploration together, though we know it's the right choice for our children to re-enter their classrooms.

I don't know how or if we can re-create that sense of spaciousness, exploration and wonder when we return to the grind of the school year routine. But I don't have to do it alone. My children can show me the way.