Bedtime Theology with the 3 yo... 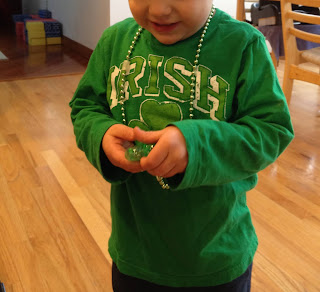 Me: Oh, well, he was a saint and he lived in Ireland.

3 yo: Can we go to his birthday party?

Me: Well, he lived far, far away from here, and a long time ago.

We don't make a huge deal of St. Patrick's Day at our house (though I am wee bit Irish) but I wouldn't mind making a bigger deal of the saints in general. The stories of the saints can inspire us, challenge us and invite us to imagine how we, too, might be called to orient our lives toward God.

Growing up Lutheran in the Midwest in the 1980s, I felt a bit suspicious of the whole business of saints. I'm sure I picked up that from adults around me who were themselves raised to steer clear of anything that seemed a bit "too Catholic." That attitude seems silly now, especially since I married a man baptized and (sort of) raised in the Catholic church. But its easy to avoid what seems different, so didn't think about saints, until I arrived at a Lutheran undergraduate school.

One cold November day during my freshman year of college, I stepped into the cafeteria, ready to grab my customary bagel sandwich, and instead was handed a rose by a young woman near the door. She had buckets of them, and passed them out to everyone. It's Saint Elizabeth of Hungary day, the woman said to my perplexed face, as if that meant anything to me, then she quickly continued the distribution to the next in line behind me.

St. Elizabeth of Hungary, I eventually learned, was a princess who lived in the early 1200s. She built a hospital for the poor with money from her dowry and cared for them herself. The Miracle of the Roses is attributed to her: once when she took a basket of bread from her castle kitchen to the poor, she was stopped by someone suspecting her of stealing castle treasures. When she opened the basket, it was full of white and red roses. Elizabeth was made a saint in 1235, a few years after her death. She became a favorite saint for me, for her dedication to the poor and her willingness to use her power and influence for the sake of the vulnerable. I think about her story every November 17 and it encourages me toward generosity and to orient myself toward those in need.

Imagine learning to appreciate a saint at a Lutheran college! The experience opened me up to the idea of sainthood; I've since known many friends and acquaintances who have powerful stories of saints in their own lives. They keep them as tokens on coins or on small placards hung from a car rearview mirror. Some of them have stories about how a saint helped them through a difficult time or gave them hope. How does it all work? Are the miracles real? Who knows? Does it really matter? Must God be limited by my lack of imagination? The possibilities for holy intervention in our lives are beyond my knowing. There is a sacred beauty in naming these holy companions.

I haven't told my children much about saints; I guess it hasn't come up much beyond this little chat a few years ago. Maybe we could do a bit about it on St. Patrick's Day this year. After all, everyone is Irish on St. Patty's Day! It would be fun to go beyond green shamrocks and corned beef and explore with my children why some people are called saints. And because I'm Lutheran, I'll need to add this: Martin Luther said we're all saints and sinners, at the same time. We all mess up, of course. But we all have that holy spark in us, too. That spark that we all share moves us to do those little miracles that make a difference in the lives of others. There is sacred beauty in naming the holiness in ourselves, too.