Bedtime theology with the 7 yo... 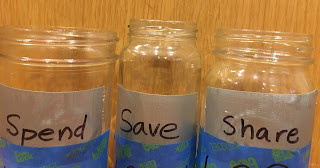 7 yo: Wait, so why does Judas kiss Jesus?

Me: The story says that he was pointing Jesus out to the people who wanted to arrest him. Judas betrayed him by telling them where Jesus was.

7 yo: But maybe he just wanted to give Jesus a kiss?

Me: Ah, well, the people who didn't like Jesus paid Judas 30 pieces of silver to do that. (A detail missing in the children's storybook).

7 yo: And people probably didn't have a lot of money in those days so maybe that's why he did it.

Me: Hmm, I never thought of it that way.

The 7 yo has been asking a barrage of questions lately about money. Who are the richest people in the world? Who makes more money, you or so-and-so? How much money do you have? What jobs make the most money? Why do some people have more money and some have less? We answer as best we can, and they all seem like typical questions for this age, although I'm not sure every 7 yo has memorized the top 5 wealthiest people in the world, in order. This kid likes facts.

So while we've talked about money plenty around here, I was a bit taken aback by this conversation. I was a bit surprised (maybe thankful?) that he had empathy for Judas and considered his motivations (I can't say that I have) but I was also intrigued that somehow my child knows that grown-ups do things they don't want to do to earn money. How does he know this? I do not remember teaching this.

I did a number of jobs as a young person that weren't much fun, but I did them for money and to save for college so that I wouldn't have to do them forever. I picked up rocks in hot, dusty Midwest fields. I waitressed for years, gagging on smoke in the days before restaurants banned it. I wiped down sweaty treadmills and exercise bikes in a YMCA to pay for seminary. I didn't necessarily hate these jobs but I didn't love them. They were always a means to an end. I know I'm fortunate. Many people toil for years in jobs they can't stand, or that compromise their values or health. Because sometimes you need the money.

My work ethic grew from the crucible of entry-level jobs; I'm ready to sign my kid up to work at McDonalds right now (kidding, sort of) because my experiences were good for me. My spouse was raised differently (read: not as poor) and we've already had good conversations about our values around teens being employed vs. focusing on school and extracurriculars. This will be an ongoing dialogue. I want my children to know the value of hard work and what it takes to earn a dollar. But I also don't want them to be on edge, constantly worried about not making it financially, or sinking into debt, which is how I passed much of my young adulthood.