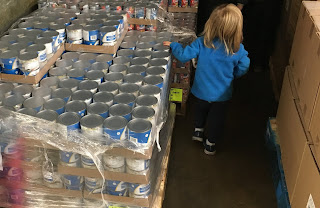 (Not at bedtime, but while stopped at a traffic light. Person is walking next to stopped cars holding sign asking for money)
5 yo: Mom, what is that man doing?
Me: He is asking if anyone has any spare change.
5 yo: Oh. Do we?
Me: No, I actually don't right now (relieved this was true).
5 yo: Oh.
Me: And we give money at church and to other places to help those who are hungry or in need (somehow feeling I had to say something else).
5 yo: Mom?
Me: Yes, honey?
5 yo: He looks sad.
Me: (Pause to collect myself). Yes, honey. Yes, he does.
Raised in a rural farming community, I had little opportunity to see people experiencing homelessness. No one stood along the gravel roads requesting help. I'm sure there were many in need, but they were hidden to me. I can't remember the first time I saw someone asking for money along a busy intersection, but I'm sure I stared. For my children, raised in our mid-sized city, people requesting money at traffic lights are part of the scenery. The above chat was a couple years ago, the first time my child asked. They don't ask anymore. I'm not sure if that's good or bad.
What's the faithful Christian response to those who make requests along a road? I asked an older mom friend once what she told her children. She said she told them to make eye contact every single time, even if they never gave any money. My friend said she wanted her kids to know that folks who ask for money are every bit as human as they are. They deserve respect.
Another friend keeps granola bars or bags of snacks in her car and distributes those in lieu of cash. Generous donations to local food pantries, homeless shelters, and organizations working to change systems that keep people impoverished are also great. There are times that I have given cash, though not often. The ethical dilemma is there, right outside my car window, most anytime I drive toward our city's downtown.
A couple years ago we had a Good Samaritan phase, where for some reason we read the story on repeat for many nights in a row. Maybe weeks. Kids like repeat books. We heard Jesus' question so many times - who was the neighbor to the injured man? - that I started calling everyone "neighbor" instead of "person," regardless if where they lived. Such as: "Hey did you see that neighbor with the cool hat?" while on a hike, or "Let's move out of this neighbor's way" at the grocery store. I didn't really think much of it, until one day, I think after the conversation above, we were once again at a stoplight and a person held a sign asking for money.
Hey, one of my kids said, there is a neighbor asking for change. I don't think I gave any money to that person that day either, but there was power in labeling the man a "neighbor" instead of a "homeless person" or "beggar" or worse. My child's use of the word "neighbor" was simple and profound.
Someone once said that the more diverse people that you meet and get to know, the more of God you get to see. If all humans are created in the image of God, then we get a broader understanding with diverse exposure. Everyone really is a neighbor. Everyone is beloved. I haven't figured out exactly what to say to my kids when we're at the stoplights, but calling everyone a neighbor is not a bad start.
Note: This conversation occurred September 20, 2018