Bedtime Theology with the 7 yo... 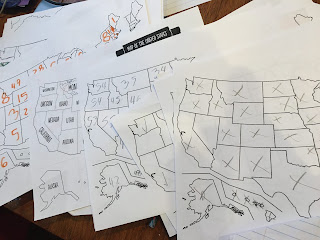 Me: What would you like to thank God for tonight?

7 yo: (Sitting up in bed and with enthusiasm) I thank God that the Europeans came over and made the 50 United States!

Pause. His expression changes from joy to seriousness.

7 yo: Except that it's a really sad story.

He currently has all 50 states' number of electoral college votes memorized and has been enjoying learning about state trivia such as which state is known for jazz or the Black Hills. He's asked dozens of questions about the formation of the US and Revolutionary and Civil Wars. For as well as a 7-year-old can comprehend it, it's safe to say he loves the US of A.
So I wasn't surprised by his prayer of thanks. But I was amazed at his quick recollection of the "sad story."
He knows the story. He knows there were Indigenous people on the lands that the Europeans said they discovered. He knows that lands were stolen, that diseases killed Indigenous people and that many were outright killed. He's asked dozens of questions about that too, after I shared a few details side-by-side with stories of the Mayflower, the Revolutionary War and the establishment of the 50 states. One of his questions: Mom, why did the White people name all the US states?
Our children become both mirrors and windows, a place where we see ourselves and our teachings reflected, but they can also show insights and glimpses of things beyond ourselves. In that short prayer time, I saw a 7-year-old's absolute joy and love of the US, as best as he can understand it right now, and his ability hold the sadness of what has been done in the name of forming this nation.
Sometimes I hear grownups talking about loving our country, as if it's a fuzzy feel-good sentiment that stops there, uncritical of the flaws that made us who we are. I have heard criticism for daring to question the "goodness" of "America." I believe that when you really love something (or one) you love them flaws and all. Is it even love if you don't come to know the whole package? I've long felt that tension of being grateful for this country yet deeply aware of the injustices of our past that are still present today.
But I was surprised by my 7-year-old's ability to do that. His US geography passion was undimmed by his recollection of the "sad story;" he still asked me to print more maps the next day for some other mutation of The Great Geography Project. Somehow, the love and the sadness about the US can co-exist for him. And I think, if 7-year-old can do that, then there's no reason the rest of us can't either. Love the US, love it with the joy of a 7-year-old who's discovered a geography passion. But hold that sad story in tension.
Lutheran theology has at its core the ability to hold things in tension. God is both hidden and revealed. We are both saint and sinner. We believe and doubt. This is an abstract way of thinking, but I find it helpful and comforting. It feels spacious and real. There is room for me, and everyone else. I don't have to pick a side.
The truth is, God doesn't really pick sides either. The Old Testament prophets demonstrate this clearly in relation to the kings. When the kings are making faithful and wise decisions, the prophets point that out. When the kings descend into greed, corruption and oppress the poor, the prophets point that out, too. No king is perfect. No earthly political party, politician or nation is completely sanctioned by God as the chosen realm.
The prophets worked for justice and that would be a good next step for my little theologians. Justice looks at the systemic, root causes and works toward long-term solutions. That's a bit more complex with children than simple acts of charity. I'm still exploring what it means to teach my children about justice (maybe that will be a later post!) but here is one small thing. I posted part of the above reflection as a Facebook post recently and while I got several nice responses, I also was nudged to help my child learn about tribal nations, including traditional names and territories. One friend shared this website from a Native-owned company of tribal nation maps, so I ordered one. It's a pretty small step toward justice, but maybe we're moving in the right direction. At the least, I'm pretty sure my kid will love another map.