Bedtime theology with the 4 yo... 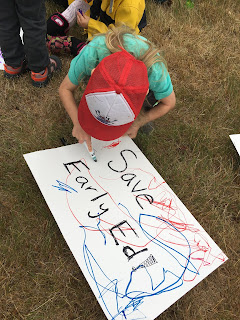 4 yo: How that boy beat Goliath?

Me: Oh you're asking about the story of David and Goliath. Well, the Bible story says that David flung a rock at him and it Goliath in the head and he died.

Me: Well, I guess so. But he was more famous for being a king.

Me: The Bible seems to say that. David brought God's people together so they could be more united, like connected. But he wasn't perfect all the time.

Me: (Shoot, I did not want to discuss adultery at lunch). Ah, well, one time he took something that wasn't his.

Me: There was a lady who was married to another man and he took that lady to be his wife.

Me: (Redirecting fast) Ah well, you know, sometimes you kids take things from each other when you get jealous. Grown ups do that sometimes, too.

I recall a worksheet or hand-out from my middle school years of religious education, called Confirmation in the Lutheran tradition. It listed all the kings of Israel, the dates of reign, and then a column entitled "Good/Bad." It was nearly a solid column of "bad," with the notable exceptions of David, Josiah and I can't recall who else. In some ways it's reductionist to label them "good" or "bad;" the human paradox includes a hefty mix of both. But the bigger point was probably that kings were overall a failed venture for ancient Israel, for reasons that aren't that dis-similar to my children's jealousy over the other one's toy.

Ancient Israel consisted as a confederation of tribes, ruled by judges. It was working out pretty well, at least as far as God was concerned. But the people began clamoring for a king, because they saw that other countries and nation-states had kings, along with impressive armies and palaces. Power is tempting, and they wanted it. God resisted, reminding them that they had God and didn't need a king, especially one with all the expensive trappings (you need a lot of money and slaves to build palaces, keep up a retinue and outfit armies).

But the people insisted, so God gave them what they thought they wanted. Hence, the middle-school handout list of "bad" kings. Most of them ended up being power-hungry, corrupt, and morally bankrupt. They coalesced power in the hands of the few, while widows and refugees starved. They worshipped themselves instead of God. Their absolute power corrupted them absolutely.

I didn't explain all this to my children, as our chat wandered in a different direction, but the point isn't hard to follow. Don't waste time longing for what someone else has, and don't take it from them. It's a commandment and a kindergarten lesson, one that we adults still struggle to learn.

It was an election week last week here in the United States, which makes an interesting juxtaposition to this king conversation. What kind of leaders do we want for our nation? What is the role of power? Should we build up military might? Should we fashion a big or small government? Ancient Israeli kings were expected to be the political and religious leaders of their kingdoms. I'd like to think we separate it out a bit more, but morality still matters.

My kids were really into the election this year. We colored maps red and blue. We taught them about the legislative branch of the US government. We attempted to explain the electoral college. We watched the news broadcast the night of November 3. My kids asked me every morning after about who had won or who was winning. It was a weird year, and the first election my children will remember.

I don't know what they'll eventually recall from the election of 2020, or where my children will land politically as they get older. My husband and I have shared some about our political leanings and why, but I hope our children learn to think and vote for themselves one day. I've taken them to vote with me, when I've testified at a state legislature hearing and to rallies for causes like supporting early education. I hope I've given my children a few things to think about, when they imagine the world they'd like to see.

A seminary professor once told our class that the "drumbeat of the Old Testament" is to care for "the widow, the orphan, the stranger." This was, in part, a response to the lack of the kings of ancient Israel to do so. By "drumbeat," my professor meant that these words reverberate throughout these ancient texts, again and again, as God's steady command, and invitation. It's a good reminder for the voting booth, our checkbooks and our lives of prayer. It is a lesson even our children can understand.