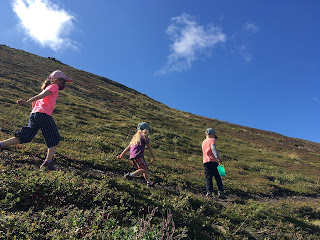 Me: (Pausing mid-story) Okay, so Peter was a disciple, and after Jesus went back to heaven, Peter was being a helper like Jesus was.

Me: A disciple is someone who follows Jesus and tries to be like Jesus. We're disciples, you are disciples.

6 yo: Do you know anyone who's not a disciple?

Me: Well, what do you think?

Me: I liked your questions about a disciple. Do you think you are a disciple?

Me: How do you know?

I heard in Sunday School that I could be a disciple and follow Jesus but that's pretty abstract for the under 12 set. I didn't think of myself as a disciple; we were just Lutherans who went to church.

Disciples (in my mind) were fisherman who dropped their nets and followed Jesus. Disciples were people who lived a long time ago. Disciples gave away everything to be with Jesus. Me, I was a skinny farm kid with coke-bottle glasses who was just a little bit more interested in Sunday School than other kids, but probably not much of a disciple (the way I thought of it).

Being a disciple sounded hard and a bit extreme. In college I read Dietrich Bonhoeffer's classic The Cost of Discipleship, where he says "when Christ calls a man [sic] he bids him come and die." Bonhoeffer, a German Lutheran pastor who resisted the Nazis, was eventually captured and hanged at a concentration camp. Now there is a disciple, but not one I was eager to emulate.

As a pastor in my first congregation, I struggled to use discipleship language, and when I did it still sounded abstract: let's follow Jesus! Live a life of discipleship. What does that even mean?

I watched a video series around that time by Rob Bell, an author and pastor. These popular Nooma videos took Biblical concepts and broke them down with powerful storytelling. In the video called "Dust," which I have watched repeatedly over the years, Bell explains that those fisherman who dropped their nets were just these average, young guys, who were doing their fathers' trade because they didn't have what it took to stay in school or become an apprentice (a disciple!) of a rabbi.

When Jesus said, "follow me," to those average joes, they were thrilled. A rabbi only said that if he was sure you could do what the rabbi himself could do, that you could be like the rabbi. It was the greatest honor in their world to be invited to be a disciple. It meant Jesus saw something in them.

Jesus' Biblical disciples did big things but they did small things, too. Rob Bell's video cracked open in me this awareness of the little acts of discipleship that are possible and that matter. Honestly, I'm exhausted right now with all things pandemic and piling up. But my kids and I collected some canned goods in the neighborhood for a local food drive this weekend. We paused in gratitude while hiking today to notice the God-given beautiful fall weather. We prayed tonight at bedtime.